In the movies if there’s a sound followed by a character saying, “What was that?” you know that whatever follows isn’t going to be good for that character.Â  That three word phrase always gets our attention.

It’s an ink black, dark night. Your head has found perfect pillow placement and your brain has discovered the blissful world of REM sleep.Â  Suddenly there’s a loud ‘crash’ and your spouse says in a semi frantic voice, “What was that?”Â  Your suddenly de-REM’d brain is still groggy so your response is something brilliant like, “Huh?”Â  A brief discussion ensues and it’s determined that the sound came from someplace like “maybe the basement.”Â  You stumble downstairs and search for something that must have fallen to the floor.Â  If you’re lucky, you find a broom has fallen off it’s hook. But it’s much more likely that you won’t find anything.Â  The search that follows ends up encompassing every room in the house followed by a flashlight review of the exterior siding and roof.Â  You finally decide that, what the heck, the front porch is still attached so why worry. You head back to the bedroom where you find your spouse snoring lightly into her pillow. You spend the next sixty minutes trying to calm your brain which is working overtime to conjure up all sorts of sources for the noise.

“What was that?” are three very powerful words.Â  If the house is dark and quiet and you hear a soft rasping sound coming from some indistinct household location, “What was that?” might be expressed with a breathy, slightly nervous delivery.Â  The sound could be anything. Is it a mouse crawling in the wall?Â  Maybe a bat, trapped between the walls?Â  Carpenter ants chewing to a Latin beat? Yep, sleep will come hard tonight.

If you’re walking back to the car after fly fishing and you hear a rustling sound in the brush next to the path, your brain silently screams, “What was that?”Â  The rustling sound is quenchedÂ by theÂ loud thudding sound of your wildly beating heart. Â Your intellect works to convince you, “it’s really nothing,” but your heart definitively won’t beatÂ quietlyÂ until you’re safely back in the car.

There are rare occasions when these three words might include a fourth – “What the #+!&$ was that?” The four word expletive version usually follows a really loud noise like the “Kaboom” of a gas grill blowing up.Â  Or after the distinctive crash made by a brand new flat screen TV falling off the wall mount.

Saturday, Judi and I were watching TV.Â  It was very windy. Unexpectedly there was an odd sound that caused us to simultaneously utter those three dramatic words.Â  Judi thought it sounded like plastic rustling.Â  I thought it might be sand blown through the screens on the porch.Â  It wasn’t dramatically loud nor scary dark out so we let it pass. Then the dog informed me that he needed to inspect our lawn.

The tree I found strewn across our front yard was tall enough to hit the front deck or windows. Fortunately it drifted away from the house as it crashed.Â  Fifteen feet to the south and Judi and I might have simultaneously utteredÂ theÂ four word version; “What the #+!&$ was that!” 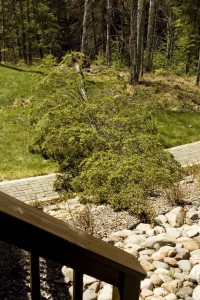